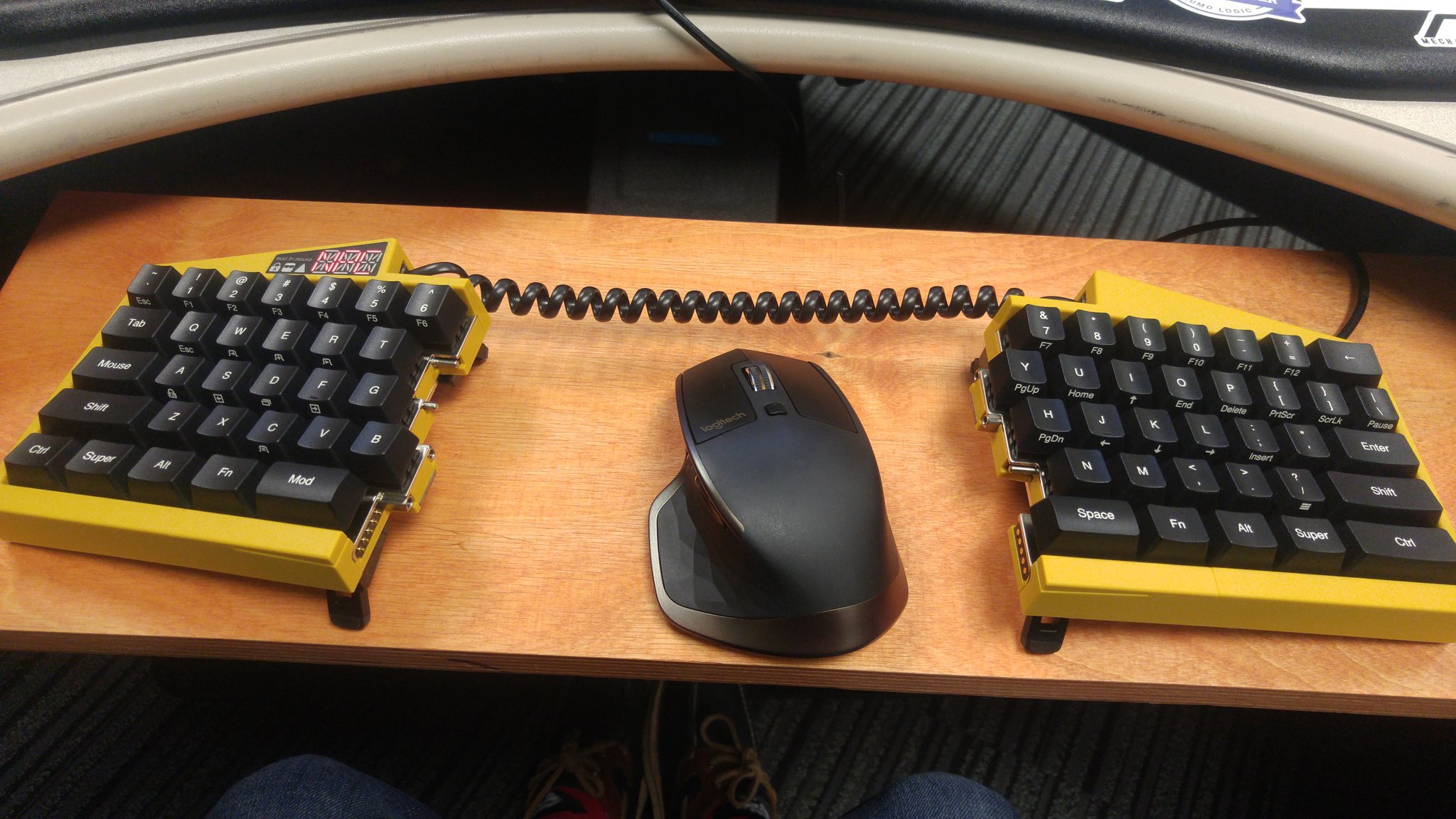 Pain. A few years ago I suffered from tendinitis, first in my right elbow then in my right wrist. Months of physio therapy brought me relief, but I often feel tightness in my wrist after long days of typing or mousing. I searched for a keyboard and mouse combination that might help.

First I tried ten keyless style keyboards that have no number pad, allowing the mouse to be closer to me, reducing wrist strain. But typing was still a problem, causing my wrist to flare up after long days of typing. Years ago I had a Microsoft Natural keyboard and I found it comfortable, but it had a number pad making mousing a problem. I wanted to find an angled keyboard like the MS one that was also ten keyless. I found a few options and settled on the Ultimate Hacking Keyboard. The UHK has two halves that you can angle, space, and tilt for your comfort, and it has advanced software functions.

Having less keys than even a ten keyless, you have to make some concessions about seldom used keys. But the UHK's key programming app is a game changer, allowing you to program any key for any key value or key combination. The app is multi platform (Linux, Windows, OSX), but the best part is that the app is only for changing the keys, not for running the keyboard. Your changes are stored in the keyboard so they go wherever you go and no special drivers are needed. There's even an online demo you can try.

Macros allow you string multiple key combination together. Useful for gaming or other key combo shortcuts.

When you order the UHK you can choose from a selection of mechanical key switches. Mine are brown style, not Cherry brand, but very similar to the brown Cherries on my ten keyless with a good spring and a subtle click that won't annoy your cubemates.

You can install the titling legs in multiple places. I chose to tent my halves so my wrist are at a neutral angle.

"Oooh cool keyboard." Get use to hearing that.

Moving the halves apart combined with tenting means my wrist are straight and the mouse between the halves is a more natural movement that does not aggravate my wrist. This arrangement is comfortable and does not take long to get used to.

Being able to position the two halves of the UHK apart is amazing, but the spiral cable that joins them is springy and tends to pull them back together. The cable uses two 4 pin RJ11 connectors so you can make your own longer cable cheaply. 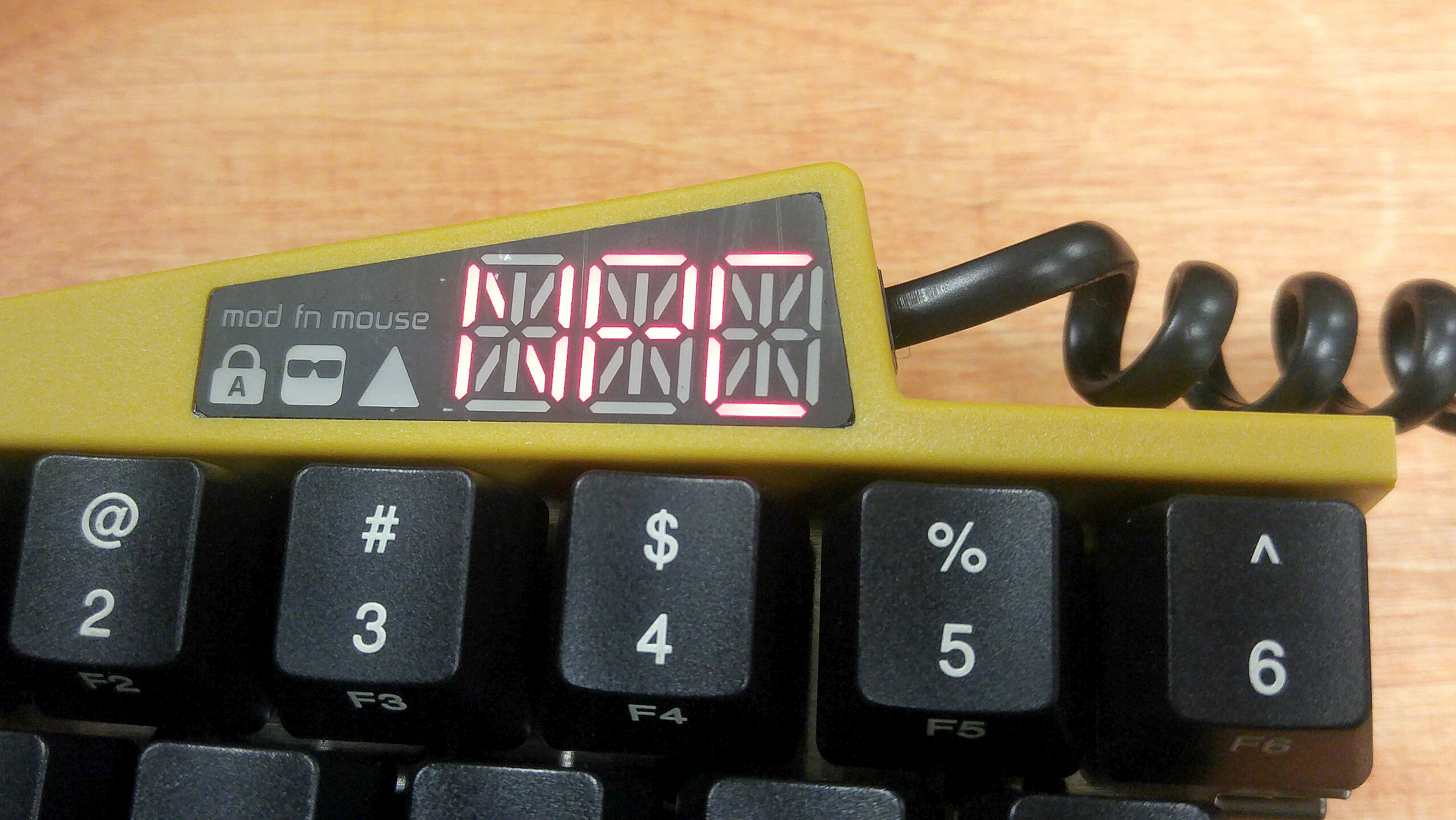 A LED display on the left half shows the current map and mode but the map display is hard to read. The white off LED segments stand out almost as much as the on red segments in a bright office. 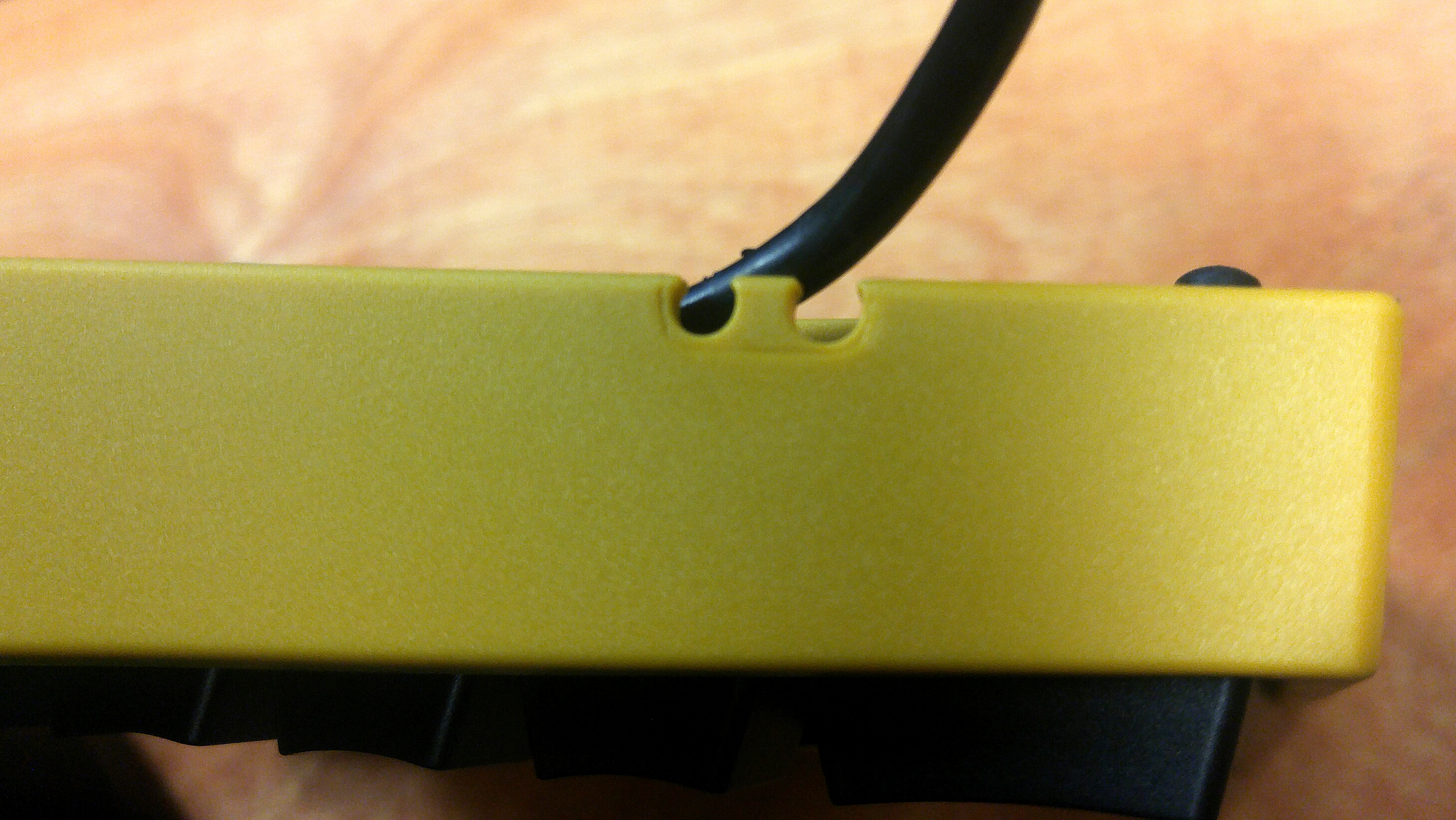 Those notches are too small for the USB cable to pass through. What are they for?

The UHK case has a few colour options and I ordered orange. Sadly the orange is mustard yellow.

I use Linux and Vim daily and made a few layer changes that you might find useful.

By default the escape key requires a layer two key combination. Untenable for Vim use. I changed the mouse key to escape. Holding the mouse key still gets me the mouse layer keys, but I seldom use them.

The default cursor keys in the mod layer are set up in WASD style but on the right hand side. I changed them to match the HJKL movements of Vim.

Physio therapy relieved my pain but I can still feel tightness in my wrist after a long day of work. It's early days for me and the UHK, but so far the end of day tightness is less than before the UHK. The price of the UHK is high, but the build quality and thoughtful design are both very high. For me it was a good buy.