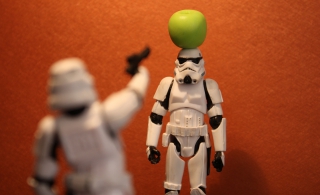 CFEngine is different. It took me a while to understand it. It was a lot like calculus. In the beginning my brain exploded, but later it began to understand. I was enlightened. Let me tell you what I've learned about CFEngine.

CFEngine's declarative language requires a different approach to development than scripting. Let's break the shackles of procedure and declare our promises! Don't think 'what steps do I take to make this configuration?' CFEngine is designed to use its own built in procedures to reach your goal. A promise declares what you want, not how to get there.

In this example script we have to mentally parse it to understand the end result.

In a CFEngine promise, we state our end result, and CFEngine uses its own built in code to make it happen.

Figure 2: A clear promise no politician would make.

Focus on the end goal

When you begin to write a promise or a bundle of promises focus on the end goal. What is the ideal state you're trying to reach? Describe it in your language, and then in the CFEngine language. Before you know it you'll have a prototype and you did not need a procedure.

Everything going on in a modern operating system can be described in terms of files, commands, and processes; and CFEngine promises are the same. Whatever your end goal is, break into these low level concepts and the promises you need will be obvious.

Beginners often don't realize how much CFEngine can figure out automatically. Don't try to box in your policies with too many restrictions. Start very simply and the results will surprise you.

Use generic bundles that accept parameters much like functions in other languages. Your bundles should generic enough to be reusable.

Try to separate policy from data whenever possible. Data separation makes policy maintenance faster and simpler. Read in parameter files. Use template files. EFL has many such examples for your reference.

Speaking of template files, I always favour them over policies that only promise selected lines inside an existing file. The trouble with promising only a portion of the file is, what if the rest of the file is corrupt? Don't go half way. Deliver a complete promise and your boss will thank you.

Readability over efficiency. I said it. Code junkies everywhere just sucked in a great breath. CFEngine is not a procedural language, but there are some procedural aspects to it, like class dependencies and the depends_on attribute. The more you reduce the code in the name of efficiency it often becomes very hard to understand. Use comment, handle, and tag attributes to document your promises and use meta promises to document your bundles. One of the great things about CFEngine is that once it is working you seldom have to revisit your promises, but when you do you'd better be able to understand them.

I encourage you to seek out the many readily available CFEngine frameworks that offer a vast collection of ready to use promises and bundles. Don't reinvent the wheel. If you do write your own policies name them well.

You may have multiple bundles that are similar in function, so naming the first one ssh may not be a good idea. Use more descriptive names. One large organization I worked with had bundles written by many departments. They used a numbering system like ssh_1122. I prefer using bundles names that imply the bundle's intent; Ssh_for_dmz is much clearer than ssh_by_neil.

Handles must be unique. A popular naming convention in the CFEngine community is bundlename_promisetype_class_promiser.

Classes should be named on discovery for inventory purposes or intent if a class will trigger an action. A Class that identifies hosts in a dmz might be dmz_172_16_4_hosts. Production web servers might be in the class prod_myapp_webservers.

Some classes are about intent or action. A class defined to restart an application should be named restart_web_server or restart_snmpd. Since classes can be global be specific in your names to avoid name collisions. Sometimes I like to prefix the class with the bundle name so I know where it came from. There is something called namespace in CFEngine, but I find that too complex. For me simple prefixes suffice.

It's common to promise file permissions and content in a single promise, but what if the promiser file is sshd_config? If you have a follow up promise to restart sshd if sshd_config changes that restart will be triggered even by a permission only repair. Separate these into two promise to avoid this disruptive behaviour.

Promise types are considered by the agent in a set order. This is called normal ordering and you cannot change it. Vars are evaluated before classes, and both of these before files. You can delay promise evaluation by using depends_on or classes, but if you find that you are working very hard and wish that you could change normal ordering then your approach is wrong. Go back to the beginning and try again.

Shell commands in variables, classes, or commands promise force the agent to start a partial or even full shell. This is expensive and a common cause of slow running policies. Use the shell sparingly.

Like crond, CFEngine's environment when it starts a shell process is different than your shell environment. Test carefully.

Don't use command promises to cheat

Some folks, unable to get the promise they want, resort to using a commands promise to call a script. Shell commands slow the agent down and you must rely on the quality of the script, and not CFEngine, to determine promise success.

Avoid promises that are too broad

The more precise your promise is the more certain you can be of its success. Promises that are too broad, like bulk, recursive file permissions, can affect files you did not think about.

In CFEngine's default policy update.cf, previously called failsafe.cf, allows the agent to pull new policy from the policy server. If promises.cf or related files have errors the agent may not run, but update.cf is separate and will allow the agent to download corrected files when they are available. If update.cf has an error, however, there is no mechanism to get repairs, and you'll have to fix every host by hand. If you choose to modify update.cf and related files, test very carefully.

An error in promises.cf or related files might cause cf-exed to fail, preventing update.cf from being run. I use a backup cron job to call update.cf directly.

You may recognize this, it is similar to the run command in cf-execd's control body. I also go a step further and configure a bootstrap process if the update fails.

This ends the second part of my best practices with CFEngine. Let's review.

The CFEngine ecosystem has never been stronger. There are so many choices in ready to use policies. Take advantage of these.