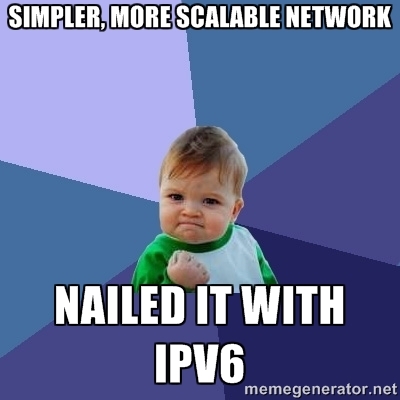 It all started when an error in my Cfengine service began restarting SixXS's tunnel daemon, aiccu, four times per hour. SixXS viewed this as improper behavior and disabled my account. The irony is that my account was disabled by a daemon and not by a human. Let me explain. I contacted SixXS support to have my account turned back on. I explained what had happened and that the problem had been fixed. I was told that I was not supposed to run aiccu under any automatic service. Aiccu is supposed to run on its own. If it breaks, a human is meant to intervene. See the irony? But really, who manages daemons manually these days? Is this the stone age? Sure enough, check out SixXS's aiccu terms of use.

I tried to convince the SixXS person that automation is good. He was not swayed. Disheartened, I consulted with the nice folks of #ipv6 at Freenode. It seems many have had fights and breakups with SixXS. Eventually I did get my account back, but only after many emails and by promising to manually run and manage aiccu. My heart was broken. I knew, in the future, I would clash with SixXS again on some trivial infraction. In this relationship, is was all SixXS. I knew we had to break up.

What mends a broken heart the best? Getting in a better relationship before your ex does. And along came Hurricane Electric. The folks at #ipv6 recommended HE to me. Like SixXS, HE offers free tunnels. Unlike SixXS, HE also offers paid network and hosting services. Their free tunnel service has interesting features.

I'm happy with HE. Is has not been long, but I feel like HE might be THE ONE.